A quaint town located in the Kumaon region of Nainital district in Uttarakhand, Ramnagar also serves as a municipal board. Situated at an altitude of 345 meters, Ramnagar town is housed on the banks of Kosi River, lying at a distance of 65 kilometers from the Nainital hill station. It is a market town with tourists flocking to the area all year round as it serves as the kick-off point to Jim Corbett National Park located there. The enchanted beauty of Ramnagar surrounded in dense greenery of the neighboring forest with the mighty mountains above makes for a pleasant sight. 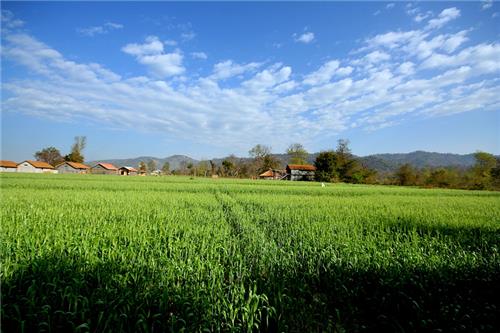 Earlier known as Ahichatra during the reign of northern Panchalas in times of Mahabharata, Ramnagar was created and planned by Commissioner H. Ramsay in between 1856-1884. Ramnagar had a couple of tea plantations in the area during the British rule but they were eventually closed down. Being situated in farmland of Terai zone with the enigmatic forest at a stone’s throw, Ramnagar is most visited for Corbett National Park being housed here, the oldest national park in the country which was established in 1936.

Ramnagar experiences a moderate climate and the temperature fluctuates between 15° centigrade and 35° centigrade. It is located at an angle of 29.40° N and 79.12° E.

Places to Visit in Ramnagar

Ramnagar is the entryway to Kumaon and Chamoli as well as attracting a huge number of tourists to Jim Corbett National Park. This is the oldest reserve forest earlier known as Hailey National Park which was converted by Edward James Jim Corbett, a renowned hunter and conservationist. The forest safari is a huge crowd puller as the park is enriched in flora and fauna whereby the tiger is the main show stealer. Garjiya Devi Temple dedicated to Goddess Shakti is housed atop a huge rock in the middle of Kosi River, and Garjiya village is quite famous and is thronged by devotees during Karthik Poornima. Besides, Kosi Barrage, Maa Seeta Bani Temple, Corbett Falls, Corbett Museum, Crocodile Pool, Getheryo Library are renowned tourist spots in Ramnagar. Litchi Farming, Fishing, Bird watching is also popular options one can do while in Ramnagar.

How to Reach Ramnagar

The nearest airport to Ramnagar is at Phoolbagh in Pantnagar, Udham Singh Nagar district at a distance of 50 kilometers. However, the closest airport is Indira Gandhi International Airport in Delhi.

Ramnagar can be accessed by road from Delhi (250 kilometers) via NH 24(Gajraula-Hapur Bypass) through Moradabad, Thakurdwara and Kashipur.

Hotels and Resorts in Ramnagar

Ramnagar has innumerable hotels and resorts due to the influx of tourists to Jim Corbett National Park. Here is a list of a few: