Undulating hills, dense forests of Sal, Mango, Khair, Sissoo, Peepal and Pine, Perennial River like Ramganga fed by several tributaries and a vast variety of flora and fauna make the Jim Corbett National Park and Tiger Reserve of India one of the most sought after places by tourists from all over the world. The naturalists, the ornithologists, the rock climbers, animal lovers and adventure seekers in activities like river rafting visit the Park to make it one of the most sought destinations in India. 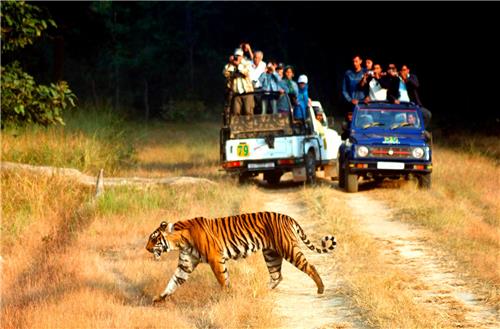 The oldest National Park of Asia and the foremost Tiger Preservation Project of India is named after the famous hunter turned conservationist Colonel Edward James ‘Jim’ Corbett who had played a very important role in the establishment of the park. The story of the park starts from 1868. The British Forest department came to control this area. It was made a reserve forest in 1879 when all lumber work except for personal domestic consumption was stopped.

It was made a game reserve in 1907. Jim Corbett came to be associated with the reserve in 1930 when the proper demarcation work was started. The British created a 324 km2 protected area and named it after the then governor Hailey of the United Province as the Hailey National Park in 1930. This was the first national park of Asia. Strict rules were promulgated to control hunting, lumber-work, capturing of animals and reptiles which was rampant in the area especially among tribal inhabitants. The forest began to thrive to reach its wonderful grandeur needed for a national park. It was named as Corbett National Park in 1956. The park is a World Wildlife Fund acknowledged and protected tiger reserve.

The Corbett National Park is spread over the districts of Nainital and Pauri in the state of Uttarakhand. The Northern area of the park falls in the hilly region of India known as lesser Himalayas but most of the park lies in the still lower Shiwalik ranges. The lesser Himalayas have an average height of 1900 m but the park is nowhere so elevated.

The highest peak point of the park is the Kanda forest rest house at a height of 1300m. The total area of the reserve adds to 1288.32 km 2 when combined with the 301.18 km2 area of the Sonandi Wildlife sanctuary of Nainital and the 466.32 km2 of the adjacent buffer zone. The core area of the park is about 520.82 Km2. Ramganga is the main river of the park that feeds its vast and varied habitat. The river Kosi flows towards the eastern boundary and also helps to feed its inhabitants. It has several tributaries like Sonandi, Mandal and Palain and seasonal rivers called Sots by the locals. These are Paterpani, Jhirna, Dhara and Laldhang that provide water to the animals and men especially in the lean seasons.

The Flora and Fauna of the Park

Jim Corbett Park is a tiger reserve first and foremost. The Bengal Tiger is the pride of the jungle that attracts most of the visitors. But there are other varieties of wild life like rhino, asiatic elephant, sloth bear, and more than 600 species of birds. The park also has marsh animals like Indian crocodile ‘mugger’, ghariyals and reptiles like king cobra, krait, russell vipers, pythons and monitor lizards.
The plant life of the park is also varied. Pine trees are found on the higher reaches.

Date-palm, kaju, jamun, amala, tendu, mahua and bel are found all over the lower areas. A variety of shrubs and about 70 species of grasses are abundantly found especially in the wet lands. Bamboo clusters are available at places. The park land offers a variety of herbs, climbers, orchids, epiphytes, ferns mosses and lichens that add to the pristine grandeur of the area. Sal is the main tree of its dense forests.

Eco-tourism and other Activities at Jim Corbett National Park

The park has been divided into 5 zones. The zoning helps the visitors to a great extent to carry on with the activity specific to the zone. There are separate safari zones for the tourists to be taken around the vast reserve area of the park. The major attractions are elephant and jeep safaris. A lot of adventure activities are also being offered as part of the eco-tourism. The best part of the zones is the availability of the rest houses run by the department for tourists all the year round.

The park is famous for the river rafting activity for the adventure seeker besides rappelling and rock climbing. Camps for school kids like Scout-guide camps, summer camps, field trips for kids and winter camps are the highlights of the activities undertaken by several agencies with assistance from the department.

Corbett Park is one of the most accessible areas due to its fame as a tiger reserve. Buses, private taxis and rail link are available. The place to reach is Ramnagar. It is the main connecting station for trains from Delhi. The place is easily accessible from Lucknow and Allahabad in Uttar Pradesh. Regular bus services are also available from places in Rajasthan, Haryana and Madhya Pradesh.

Some  good accommodation in Jim Corbett National Park is provided by the forest department that runs its lodges in various zones of the park. The lodges available at various places in these zones are given below.

Some other famous lodges and resorts run by private agencies are as follows.